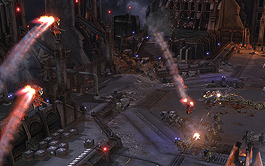 I just noticed that there is now an official website for Warhammer 40,000: Dawn Of War II, the follow-up to the stonking original. Check out the video teaser (warning: be prepared to pee a little). But I was struck by the title of the press release announcing the game (excerpt follows):

Epic scale? Epic scale? We saw a downed Titan in the Winter Assault expansion, but I’d now give you very good odds on a fully functioning Warhound or Reaver in DoW2. And check out those screenshots! I can’t wait.