This saturday morning I found myself in the unusual situation of being awake before noon and not hung over, so I made the most of the time and picked up the razor saw that I talked about in my last post. Once I’d taken a look at it I realised that it would be narrow enough to do what I needed it to do.

So I took it home and it made pretty short work of the carcass of the Imperator: 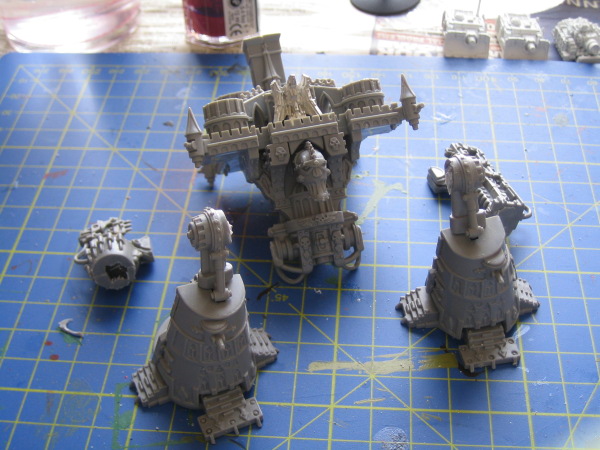 The various components came apart pretty easily, so I can now start filling in the gaps left by the previous owner, doing various customisations, and building the components that turn the Imperator into a Warmonger.

Whereas the Imperator has the tower guns mounted on the upper fortress, the Warmonger fields four anti-aircraft guns. I’m thinking about using the turrets from the Forgeworld Hydra platforms: unfortunately they only come in multiples of three, so my choices are either to try to sweet-talk Mail Order into letting me have the bits that I need, or buying two sets and selling the spares on eBay. But I think that if I can’t do the former, I might try to scratchbuild the AA guns instead.

The first piece of customisation I did was to remove the Main Battery at the front of the fortress and replaced it with an imperial eagle taken from a Battlefleet Gothic ship. I think that it will make a nice centerpiece to that part of the titan.

I also had the chance to put the finishing touches to the troop stands that will form the final three companies of my space marine chapter, here they are, waiting to be undercoated: 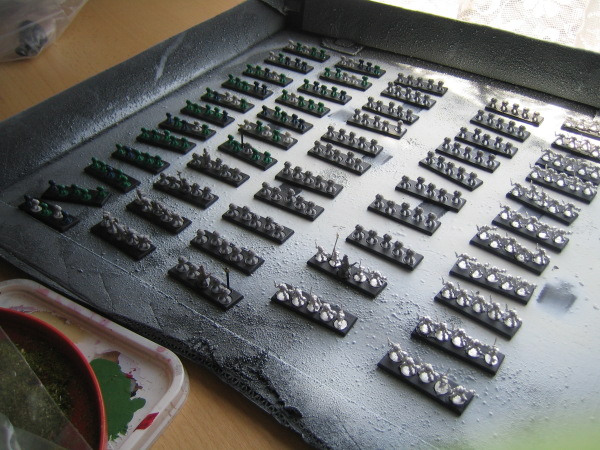 What you see here is two companies (18 stands + HQ in Space Marine 2nd edn. and NetEpic) of tactical troops (one company in Mark VI “corvus” armour and one in Mark VII “Eagle” armour) and two detachments of scouts (I already have another detachment of scouts that are base coated). Once these stands are painted, I will have a full space marine chapter: ten infantry companies, including a full Terminator company (that’s 20 stands, not just three 20-man detachments) and the aforementioned scout company. When that’s done, I’ll be posting photos, so stay tuned!

I’m quite pleased with the way the scout company HQ turned out, here’s a picture:

To make the scout standard-bearer, I removed the blade and pommel of his combat knife, and then filed a narrow groove through his enclosed fist. I used a tailor’s pin to make the banner pole (anything else would have been too thick): the imperial eagle at the top is taken from the Forgeworld etched brass sheet.