Like most hobbyists I tend to have a lot of different projects on the go at once. Here is a list of my unfinished projects as of writing:

In addition, I also have some repairs on my Warmonger to do: as predicted, the fragile resin Hydra turrets have been damaged, so I need to replace them with spares from the bits box.

So what have I been doing today? Starting something new of course! Some more titans: 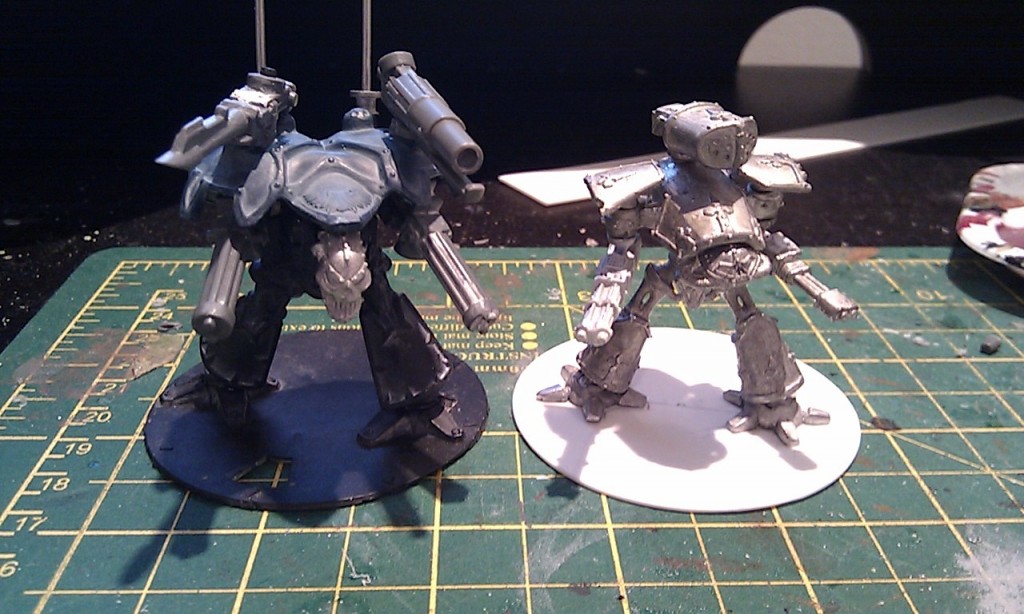 I have another Reaver waiting to be assembled, and want to get another one to form a Battle Group. This will leave my Titan Legion army with 2 Warlord BGs and 2 Reaver BGs which, along with the aforementioned Warmonger and its Imperator counterpart is quite enough I think (although I do need more Warhounds…)

I’ve also been sorting out some mechanised firepower to support the Knights and Robots. I’ve just finished stripping, reassembling and basing these:

The Ordinatus Golgotha has a fearsome reputation as an anti-Ork unit: any Ork unit that’s even targeted by one of the six missiles has to take a morale check (which is 5+ for Orks) making it highly effective at breaking large Ork companies.

I am planning to scratch-build at least one other Ordinatus using miniatures from Brigade Model’s Neo-Soviet range.

Stormblades are Titan and Super-heavy hunters. They mount a Plasma Blastgun which is normally carried by titans, as well as a number of specialist and one-shot weapons. I have a couple more coming from eBay to form a Stormblade Company.

These are also basically tank-mounted titan weapons. You can pick any of the one-shot titan missiles to mount on each model.

The mainstay of any Imperial army!

This is the first time I’ve based vehicles and I am starting to think it’s a good idea!

One thought on “Distractions”