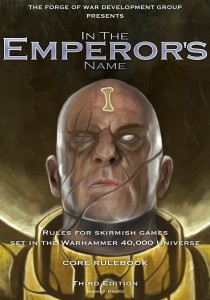 While Craig is busy writing In Her Majesty’s Name, I’ve been giving the ITEN retinue lists a going over. As well as releasing a new Necron retinue list, I have also prepared a retinue list for the Adeptus Custodes, the Emperor’s super badass personal guard.

My starting point for this list was “Space Marines turned up to eleven”. The first draft was probably a bit over-the-top but thanks to feedback on the Forge Of War ITEN forums it’s now a bit more balanced, but the Custodians would still give the Astartes a good arse-kicking mano-a-mano.

The new 40K codex for Necrons was released last year, and added a bunch of new models. I’ve just got round to finishing and releasing an updated retinue list for In The Emperor’s Name which introduces all these new models (and don’t worry, I’ve kept the Pariahs!).

Here’s a photo of a current work-in-progress: an Imperial Crusader that I plan to use in games of In The Emperor’s Name:

The miniature is a War Priest from Avatars of War. I’ve 40K’d it up a bit, by adding a Plasma Gun, Combat Knife, ammo pack and purity seal, all taken from the Space Marine accessories sprue. The head is from a Space Wolf marine. A bit of etched brass on the shoulder and on the sides of the warhammer finishes him off (note that the base is temporary).