I previously posted about Grimdarking the Kibri Goppingen Church, an N-gauge Model Railroad kit which has a mythical reputation among Epic gamers. If you saw my last post, you may have seen photos of the finished model in the middle of the battlefield.

Here are some photos of the cathedral itself. It was relatively simple to paint: I sprayed it black, then sprayed it with Army Painter Uniform Grey. The roof was washed with Gryphonne Sepia and Devlan Mud, then the whole thing was drybrushed with Coat d’Arms Mid Grey. Then I picked out details such as the shutters, doors and various spikey bits.

These photos were taken with a crap camera, I will update the post with decent pics later on. For now, I’m off to London for Salute!

If you follow me on Twitter then you may have seen me live tweet a game of NetEpic played at my local gaming store, No Man’s Land. It was 6,000 points of Necrons and Squats played over a city table: I was very pleased to be able to use a load of new terrain pieces including some GameCraft fortress walls and the finally finished Kibri cathedral.

END_OF_DOCUMENT_TOKEN_TO_BE_REPLACED

I’ve made some progress on my modular Imperial city. I still need to add more colour and detail, but here’s what I’ve got so far:

With the building modules removed, you can see the road layout:

There are pieces of plasticard in the slots to elevate the building modules. This gives the effect of a slightly elevated pavement. The buildings represent three generations of Epic: the original foam buildings from the Adeptus Titanicus boxed set, the ruined buildings sprues from Epic 40,000 and the later Forgeworld Epic buildings:

You can also see a building from Gateshead Gaming, and the previously mentioned Kibri church, which is the centerpiece:

I’ve also created some ruined buildings, which could be used to replace buildings destroyed during the game:

The roads are arranged so that another board can be slotted in on either of two sides (assuming S6 starts selling the road system again, or I’m able to find suitable replacements). The other two sides will have a reinforced defensive wall from GameCraft Miniatures.

The Kibri 6818 Goppingen Church, an N-gauge Model Railroad kit, is something of a mythical object among Epic gamers. It’s now out of production, so it’s rather hard to get hold of, but it makes for a perfect showcase terrain piece.

But if you want to use it to play Epic, it’s a little plain. It needs grimdarking, with the judicial application of spikey bits:

Having just bought a bunch of Cityfight boxes to build some 40K terrain, I’ve quite quite a few leftover pieces, which I’ve used to add some character to the building.

I’ve finally started to make some progress on my modular city system. I’ve glued down the roads and junctions in an arrangement that will let me expand to another board if/when Scott starts S6 Engineering back up again (or I find someone who can make some custom pieces for me). I’m planning on using the Fortress Walls system from GameCraft Miniatures to add a defensible city wall along two edges. More details to follow.

A while back I posted about the old Adeptus Titanicus era foam buildings I’d acquired. I’m planning on using them in the city board project.

These old building were nice in that they fitted together with a nice tongue and groove on the back. But to go the extra mile, I’ve been using putty to fill the gaps between two glued-together buildings.

The filler I’m using is Revell’s “plasto”. Unlike green stuff, which has the consistency of chewing gum, this stuff is more like car body filler, or cement, and it’s applied in the same way: squeeze a dollop out of the tube onto the relevant area, then use a spreader to shape it, and then file smooth once it’s dried.

The finished surface of the affected areas will be visibly different from the rest of the building, so I will probably end up applying a thin coat of the filler to the roof and sides of the buildings, just to keep it consistent.

Progress has been made on my modular city board project. I’ve made a start on the first two pieces: a Titan/Knight maintenance facility, and an Administratum building:

You can probably work out how this was made: I used balsa wood to create the walls (I manually mitred the ends so that they’d make nice corners. I used cocktail sticks to create the posts, and used 28mm razor wire rolled around a paint brush handle to create the barbed wire around the top. The resin buildings come from Old Crow and Wargamer.pl.

These Forge World buildings (now sadly out of production) are very nice, but have a thick 4mm base which makes them look a bit weird as stand-alone buildings. Rather than trying to cut the base off (I did have a try with my trusty razor saw) I decided to build up around the base with 4 squares of 1mm plasticard, each 1cm smaller than the next, to create a set of stairs. Since the finished piece is too big to share a panel with anything else, I decided to put it on its own panel, at a diagonal angle. I might add some more detail in the empty space in the corners later on.

A while back I mentioned my plan to create a modular city system for Epic. After months of waiting to find the time, I’ve finally made a start! 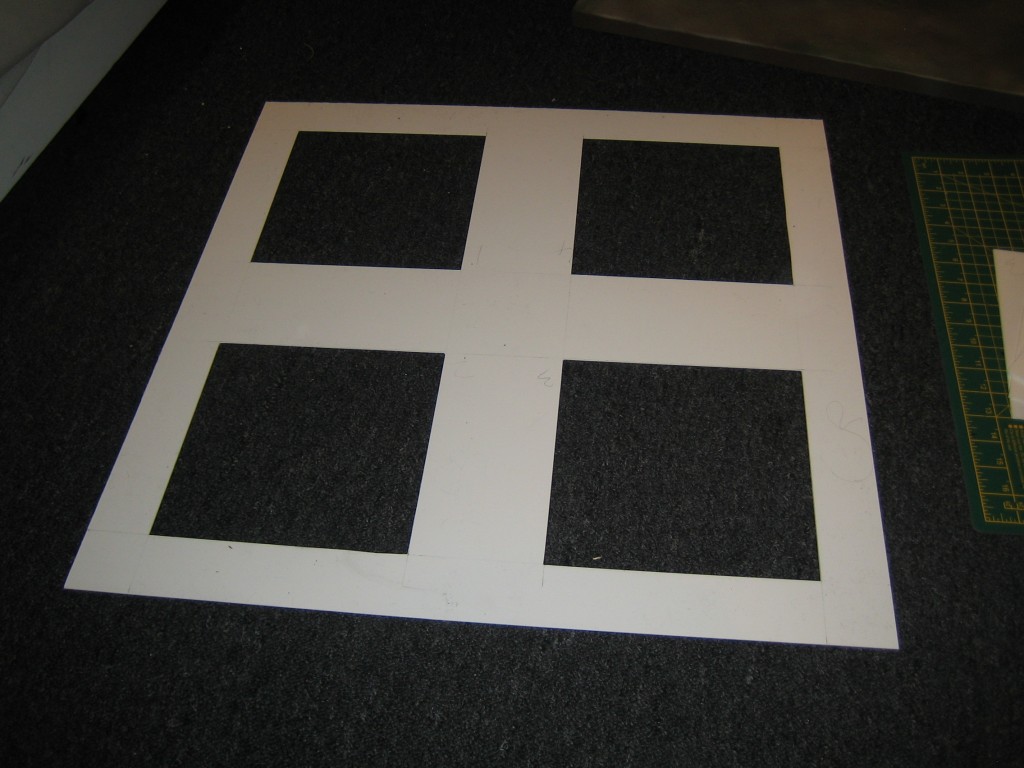 I started with a large sheet of 0.5mm plasticard. This is hard to get but can be found from professional modelmaker’s stockists, such as the 4D Modelshop in London, where I got mine.

The system is intended to be compatible with the Ziterdes modular gaming table that I use for all the games I play. This means that I had to cut the sheet to be 600mm square: when it’s finished, I will mount the sheet on a piece of MDF or similar to raise it to the same height as the Ziterdes boards.

My plan is to have a simple grid system, with square blocks that can be moved around as required. Indivudual terrain pieces such as buildings will be mounted onto inserts that sit in holes cut into the sheet. This gives the impression of a raised pavement, and also hides the joins, making the whole thing look like it’s a single piece.

After cutting the sheet to size, I cut four 200mm x 200mm squares out, leaving a 50mm border around the edge and 100mm gap between each hole (the roads are 100mm wide: not very realistic but they need to be big enough for titans and other super-heavies to maneuvre!). This means that if two boards are placed next to each other, there will always be a 100mm gap between each terrain piece.

Having cut out the four holes, I now have four 200mm x 200mm pieces of plasticard, which will form the base of each terrain piece: 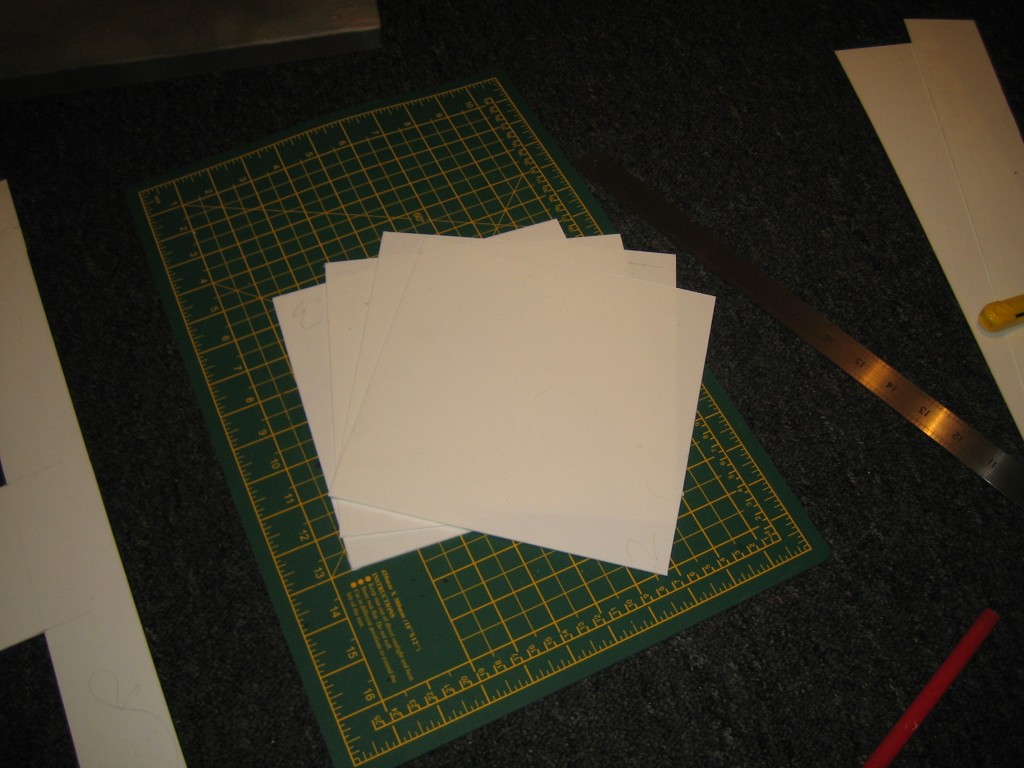 It’s taken me more than a month to get round to posting again, but let me assure you I have not been idle! Now that the Warmonger project is finished (apart from creating some banners to hang on the thing before I submit it to Epicomp 2008), I’m working on a terrain project.

I’ve been slowly accumulating a collection of 36 of the old foam buildings from the original Adeptus Titanicus box, and I’m going to turn them into a city. Here’s a picture of them as they are now: 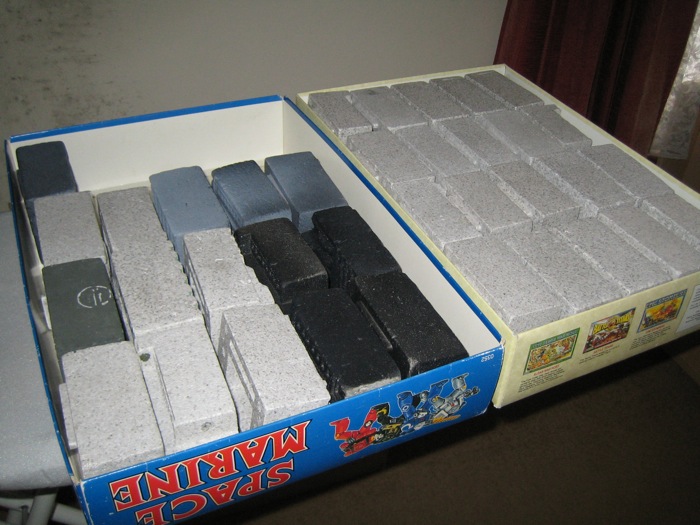 I am still working out the details of this project: ideally, I’d like to make the individual pieces modular so that they can be rearranged (there’s nothing more boring than playing over the same terrain over and over again), but I don’t want to sacrifice the realism: I want the final product to look like it’s a real city, albeit one that’s one a distant planet 40,000 years into the future 🙂 Once I’ve got my plans together, I’ll start posting progress updates.