This weekend I blitzed the robots and got them all painted. It was a pretty simple process once I’d decided on a paint scheme and set up a “factory line”.

First, I undercoated all the models with black. Then, I base coated them with a mix of Scab Red and Deneb Stone: mixing a bit of Deneb Stone (which is a “foundation” paint) in with the red increases its opacity gives it better coverage.

Here are some photos of the robots laid out on my city board: the bases are intended to match the boards. The robots have support from a few titans of the Legio Pantera.

Having a very productive day today 🙂 Here’s the model I used to test the colour scheme for the robots. Basically the same as the knights. 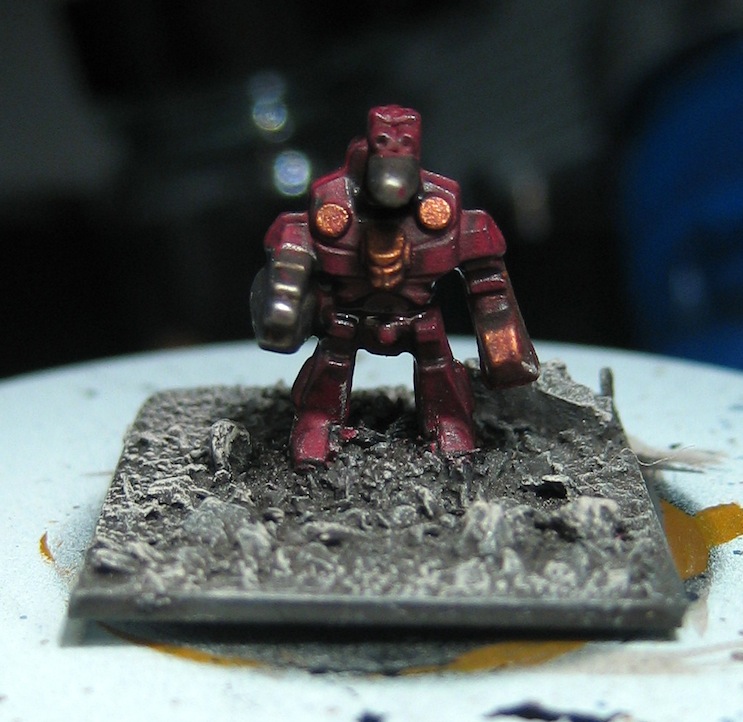 This morning I’ve been painting a test model to see what my planned colour scheme looks like.

The first step was to spray the model with a black primer spray. Once this had dried I drybrushed boltgun metal onto the areas where I wanted the metal to show through. 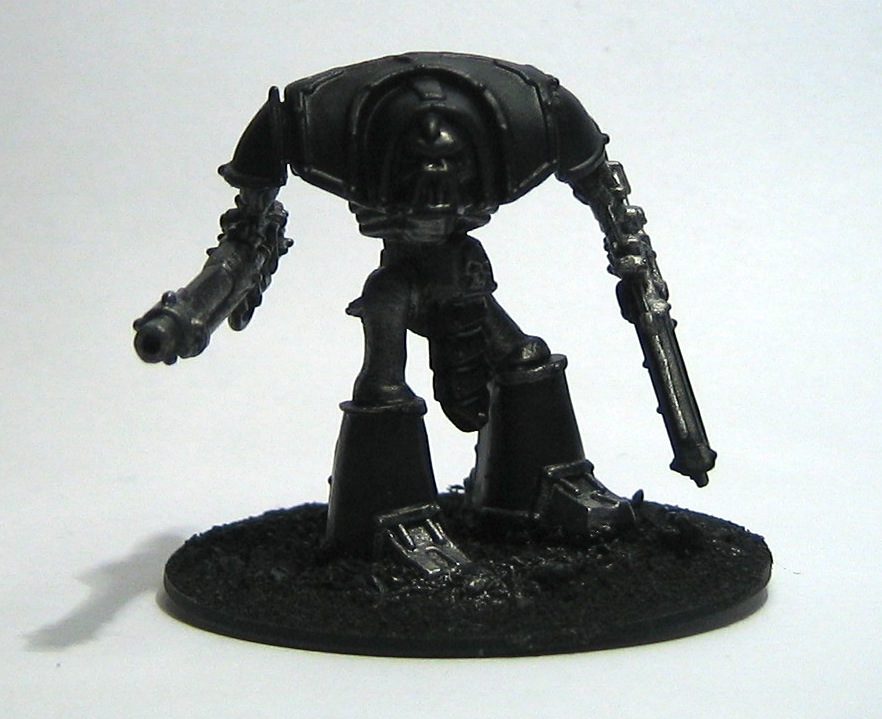 END_OF_DOCUMENT_TOKEN_TO_BE_REPLACED

Here are all the Knights I’m going to be painting. The old models were all stripped, reassembled and debased. There were a few breakages among the plastic Paladins but most could be repaired pretty easily.

I’ve also stripped and rebased all the robots. The next step is to add texture to the bases, and then they can be undercoated! 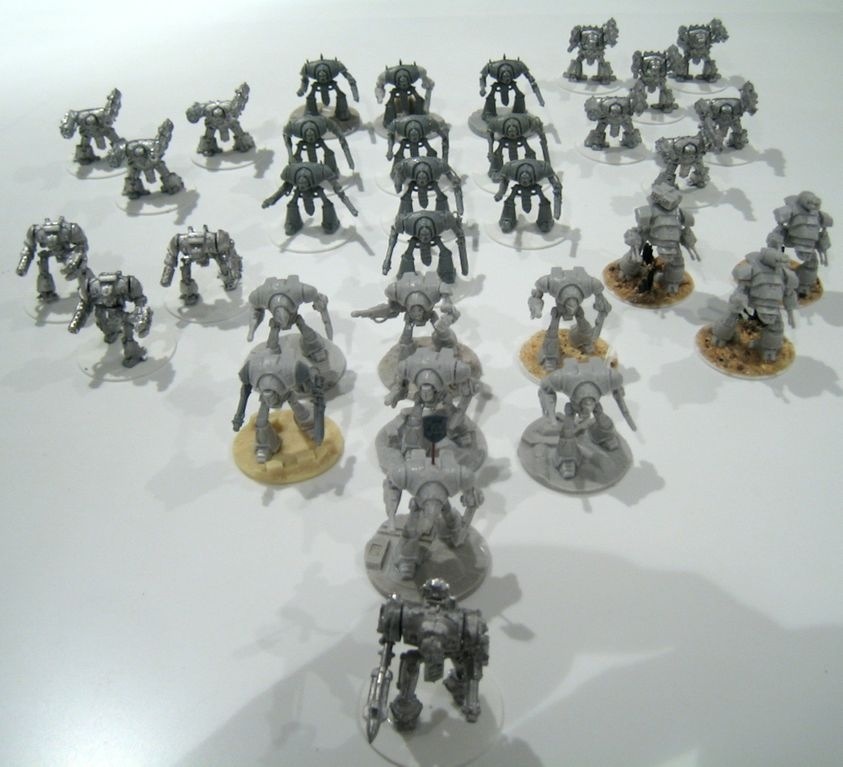 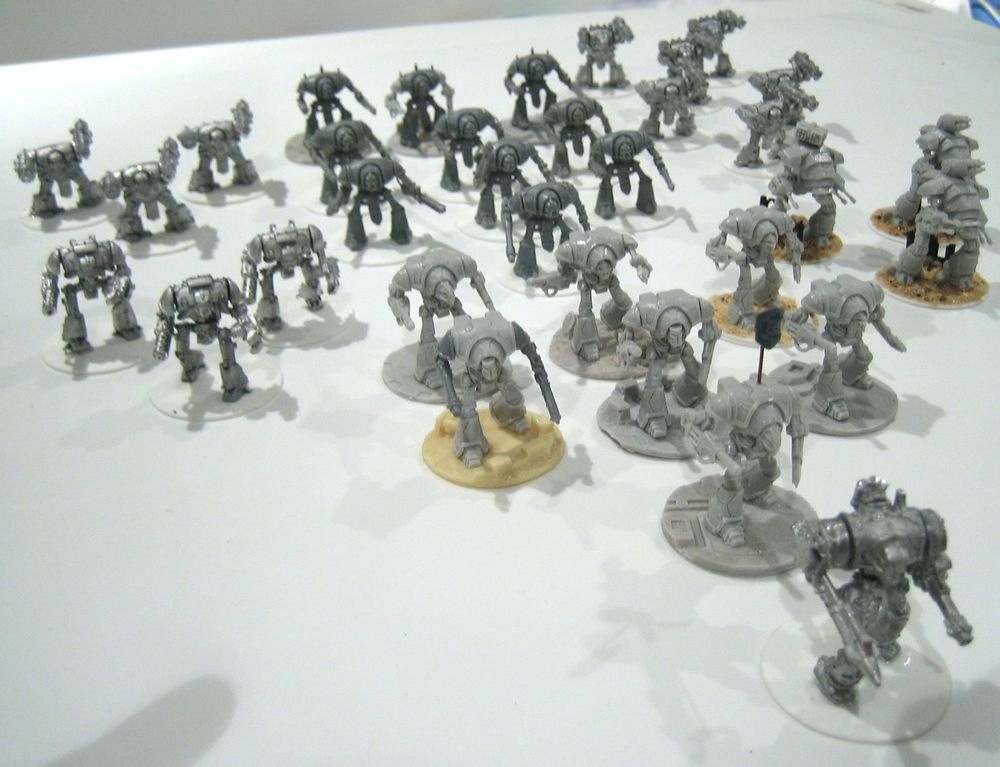 I spent some time yesterday stripping the paint off of the Knight models, which had spent the previous week soaking in Dettol.

This afternoon I’ve been reassembling and basing the models. The first model I dealt with was the Baron, the Knight HQ unit.

I’ve never been very keen on this model. The banner pole it had made it look very tall and gangly. But I’m really pleased with the new incarnation: 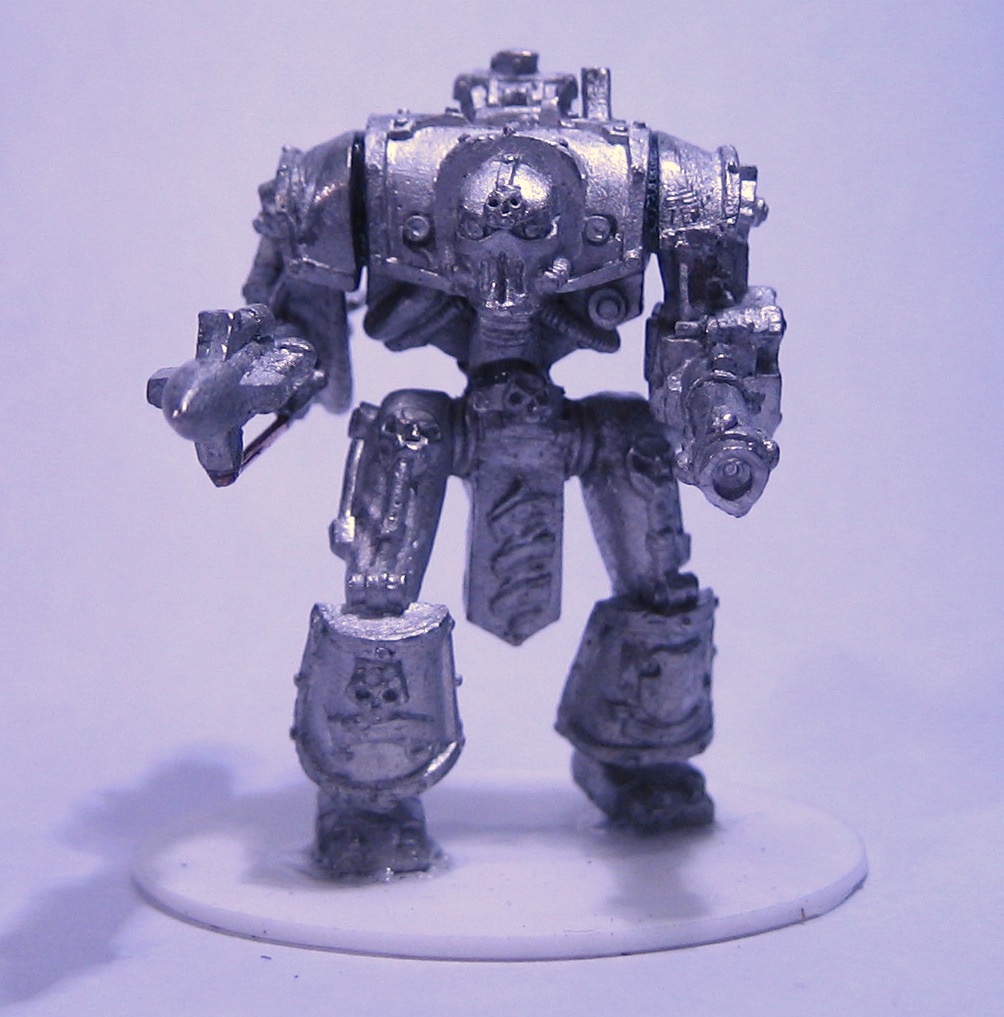 I’ve ditched the banner pole, gave the torso a twist (I used a razor saw to cut the torso away from the hip, then pinned and reattached) and altered the stance of the legs. This makes the model much more dynamic. It also worked really well for some Errants.

END_OF_DOCUMENT_TOKEN_TO_BE_REPLACED

Rather than use Skitarii or Tech-Guard as the infantry support for my Epic Knights, I’m going to use the robots of the Legio Cybernetica. It’s not clear whether robots (or indeed, Knights) are still around in M41, but that’s not a big problem, as we know they both were during the Great Crusade and Horus Heresy, so this army could very easily be a pre-Heresy or Heresy-era army.

Here’s a picture of the assembled maniples just before they went into Dettol to be stripped. In OpenEpic they represent about 2,000 points, which should be enough to provide the Knights with a screen of ground pounders. 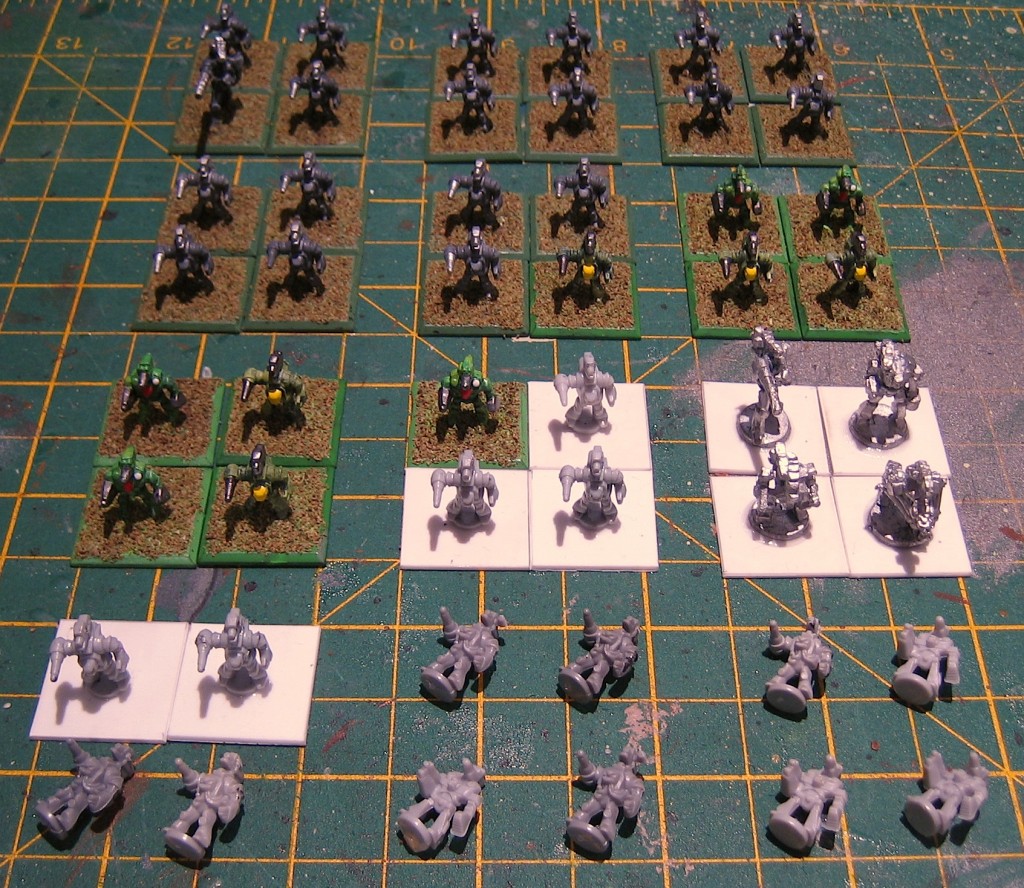 You can see a mix of all the different robot types (Crusader, Castellan, Cataphract, Conqueror and Colossus) in both metal and plastic.

My Firedrakes are now all assembled, pimped and ready to start painting. I just finished Nocturne, the final part of the awesome Tome of Fire series by Nick Kyme, so I’m totally stoked about painting my Firedrakes up and joining the ranks of the Fire-born.

However, I am temporarily putting that project on hold. I’m going to use the Army Painter camo green primer as the base coat, and as you may know, Army Painter have just announced a range of acrylic paints that match their primer sprays. Army Green is included but won’t be out until the end of March, so I’ve decided to wait until I can get some before I start painting. That way I can correct mistakes without having to mix my own paint.

So in the meantime I’m making progress with one of my other 2012 objectives: getting my Epic knight army repainted. I’ve just taken an inventory of my old army, and thankfully it’s survived a decade of neglect quite well:

What you see there is ten plastic Paladins (plus another three on sprues), three Errants, three Crusaders, six Castellans, one Baron, and three of the old Adeptus Titanicus era metal knights: one Paladin and two Wardens.

These are all going to take a bath in Dettol to strip the paint off. I don’t think I’ll be going with the old green and white quartered scheme this time: I’m currently thinking along the lines of a more AdMech combo of red and bronze.

As well as these models, I also have some of the amazing chevaliers by Thom from Epic-FR. The quality on these resin miniatures is absolutely awesome: I’ve never seen such impressive detail and design on “amateur” miniatures before.

END_OF_DOCUMENT_TOKEN_TO_BE_REPLACED

2012 is almost upon us! The last twelve months have been a period of diversification for me in hobby terms: I delved more deeply into 15mm SF stuff, finished my first 40k army in 15 years, and discovered In The Emperor’s Name.

I thought that it might be fun to post my plans for 2012, so I can look back next year and see how I did.

END_OF_DOCUMENT_TOKEN_TO_BE_REPLACED

An afternoon of #netepic awaits! 4,000 points of M

I have a new permanent hobby space (for the first