This week, the news that Games Workshop is shutting down Specialist Games has been all over the Web, Facebook and Twitter. SG has been withering on the vine for about ten years, and its death was on the cards the moment that Finecast was launched, heralding the inevitable abandonment of metal miniatures. It’s no surprise to me that GW decided to put it out of its misery.

But here’s the thing. Despite GW officially abandoning Epic: Armageddon, Battlefleet Gothic, and the other SG names, they’re not really dead. They will never be dead if the community of gamers and hobbyists continues to play games, develop rules, build and paint miniatures, and share their hobby online.

Now is the time for the various communities that have developed around these games to take ownership of them and carry them forward. This has already happened with Epic: Armageddon: the playtesting groups that helped Jervis Johnson develop the game never went away, and now after over a decade, those people are still developing new and improved rules and army lists for the game, following the same path as the original NetEpic team did. They took what GW abandoned, and are giving it new life. This should absolutely be happening with the other SG games.

Rules are only part of the picture. Obviously there are models as well. Apart from eBay, which will probably provide plentiful supplies of second-hand miniatures for all the Specialist games for decades to come, players of the 28mm based games (Necromunda and Mordheim) can make use of miniatures from Warhammer 40,000 and Warhammer: it’s a great opportunity to customise and convert. There is already a thriving Inq28 community of gamers who play Inquisitor using 28mm miniatures: some of the conversion work I’ve seen is amazing!

For Epic, BFG and Warmaster, the solution is to look for proxies: miniatures from other games and manufacturers that look similar to the “official” models. And for those who like taking risks, you can expect there to be a thriving black market in 6mm scale versions of 40K models, and re-worked variants of the old BFG ship range: if you know where to look, you can get what you need (note: I do not condone such activity, as it is clearly illegal, but I won’t deny that it doesn’t happen).

Via the Epic Addiction blog I discovered that Viz ran a cartoon series starring an amusingly stereotypical Games Workshop employee. Here’s the strip, click to see it full-size: 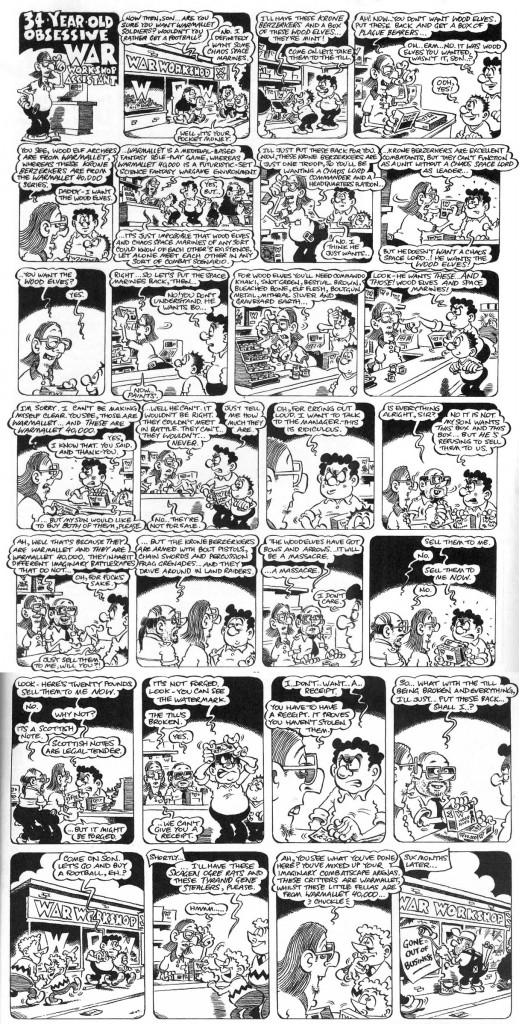