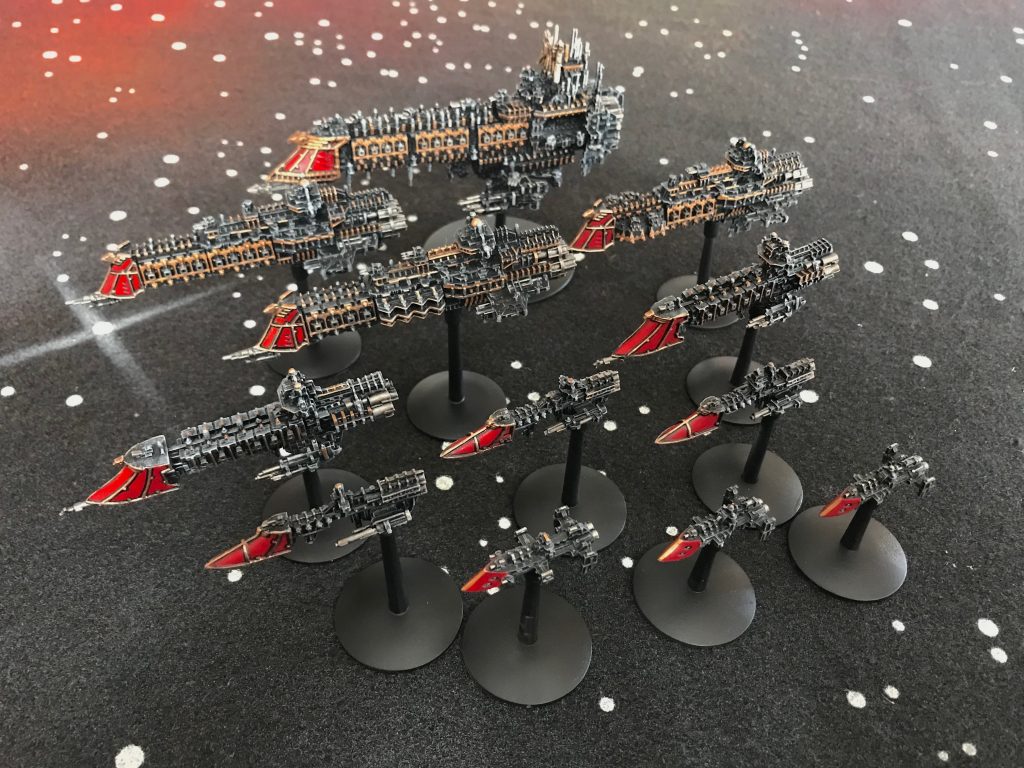 I’ve just finished repainting some of my Imperial Navy fleet for Battlefleet Gothic. The old ships (as you can see) were not painted in a consistent colour scheme, so I decided to strip them off and repaint them.

About half of the original fleet remains unpainted. I think that I will turn them into a Rogue Trader fleet: I have some old Space Fleet ships which are quite characterful and would work well in that faction.

One innovation in my painting technique for these ships was the use of Sharpies metallic pens to do a lot of the metal. It’s much faster and easier than brushing on paint, and the finish is perfect. I recommend investing in some!

More pics below the fold!

END_OF_DOCUMENT_TOKEN_TO_BE_REPLACED 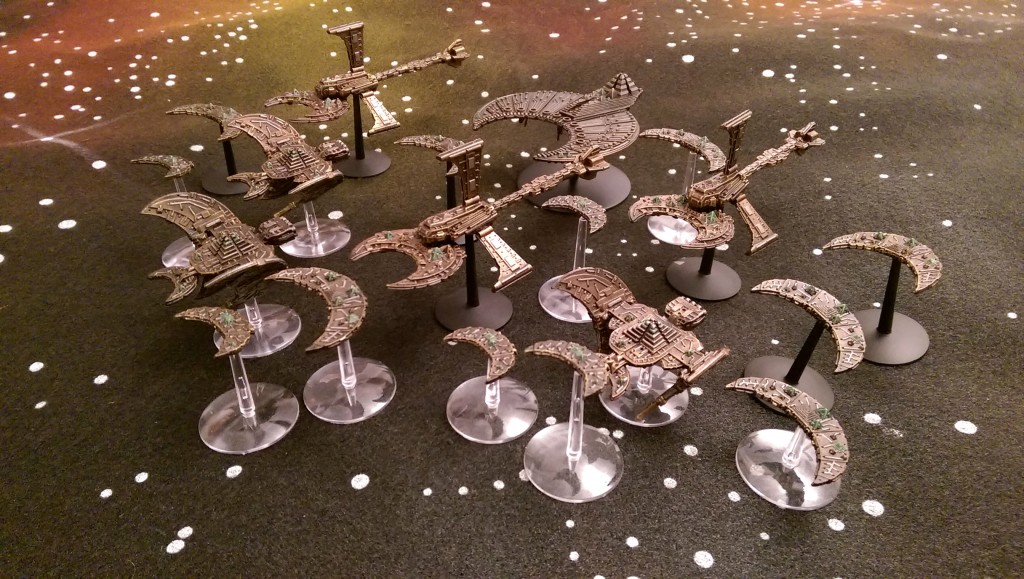 You may recall that last year I painted a Cairn-class Tomb Ship, which inspired my to repaint the other ships in my fleet. Well, there they all are!

The colour scheme is based on the same bronze and gold scheme I’ve used on my Epic- and 40K-scale Necrons, so there is consistency across all three games. 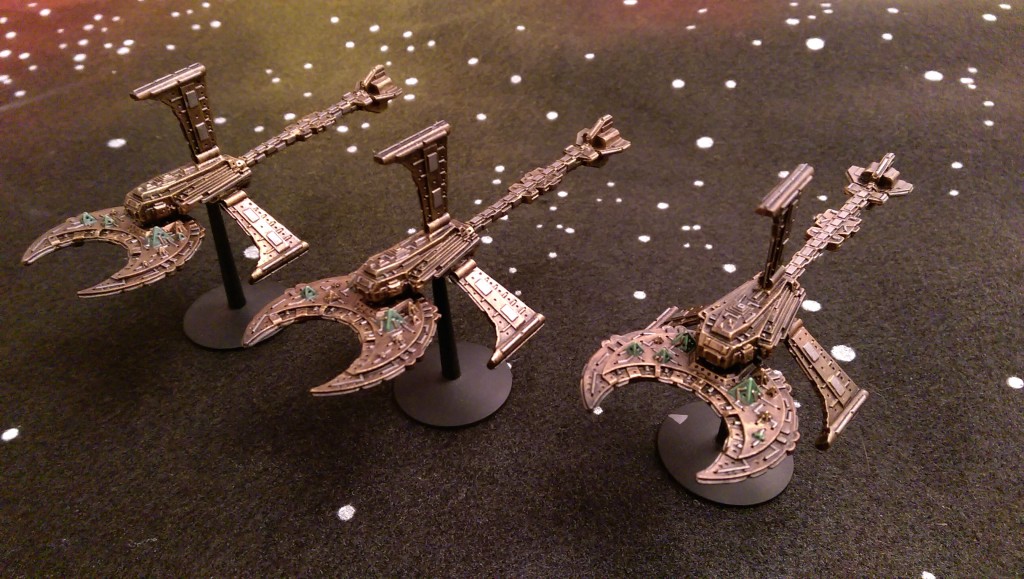 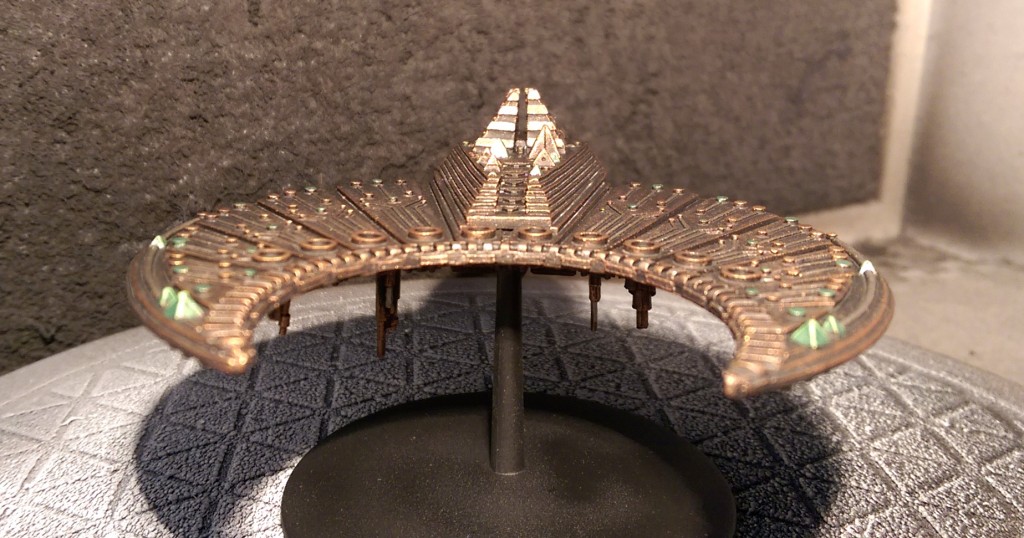 I picked this model up for a (relative) song on eBay. A couple of days ago I had a catch-up session with the airbush, to prime a bunch of models that had been sitting there waiting to be painted, and the Cairn was one of them.

I have been thinking about repainting my BFG Necron fleet, which currently has a rather uninspiring paint job, so I tried out a new colour scheme on this model. The scheme is based on the same bronze and gold scheme I’ve used on my Epic- and 40K-scale Necrons, so there is consistency across all three games.

END_OF_DOCUMENT_TOKEN_TO_BE_REPLACED

Just what are the Demiurg? They’ve been part of Warhammer 40,000 canon since the release of Battlefleet Gothic back in 1999. Some have seen them as an attempt to re-introduce the Space Dwarf archetype after the unfortunate fate which befell the Squats. Others have noted the similarities between the Demiurg and the Bentusi race from the Homeworld series (NB, save Homeworld!).

Anyway, while there are rumours about the Demiurg making an appearance when the Tau codex is revised, you can play as Demiurg in Battlefleet Gothic. There are two ship types that are available from Forgeworld: the massive Stronghold ship, and the smaller Bastion cruiser.

Several years ago I bought four of these smaller ships with the intention of giving them to a friend as a christmas present. Shamefully, they’ve languished in the queue since then. But now I’ve finally finished them! 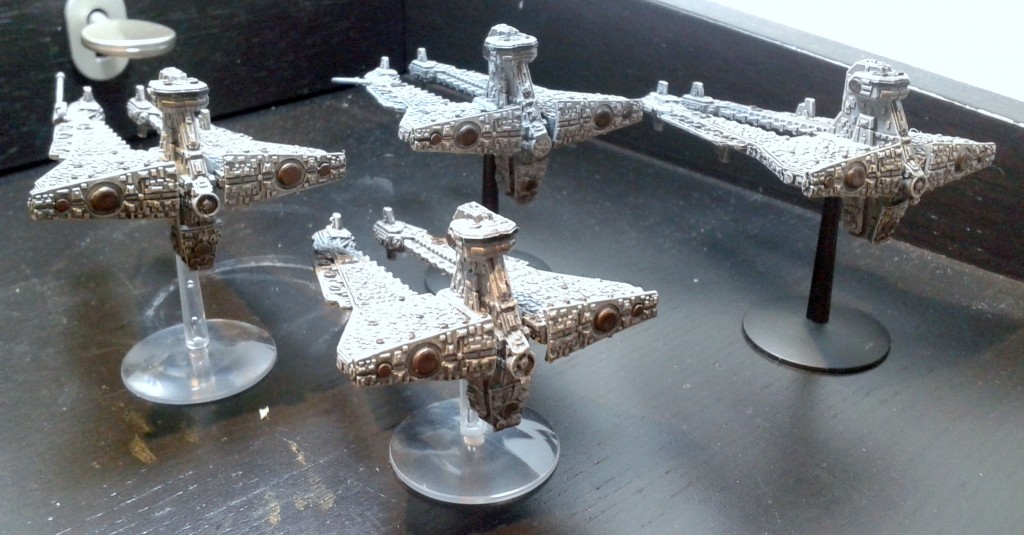 The paint job is very simple: Army Painter Uniform grey, washed with a 50/50 mix of Badab Black and water, then drybrushed with Coat d’Arms Slate Grey, and finally Citadel Rakarth Flesh. These models are a dry-brusher’s wet dream. I picked out some of the surface detail using Tin Bitz or Gunmetal, which I then washed with Devlan Mud.

Most wargamers have probably at least taken a look at space combat games like Full Thrust, Firestorm Armada, Battlefleet Gothic and the various versions of A Call To Arms. Some may even have bought some miniatures, and tried out the rules. Some may even be enthusiasts for these games.

I am a huge fan of space-based science fiction. Before my current profession of Internet Tinkerer I was a (admittedly mediocre) physicist, and my enthusiasm for physics was born from my childhood and teenage obsession with Star Trek, Battlestar Galatica and Star Wars.

When Battlefleet Gothic came out, as a 40K fan (and previously a player of Space Fleet) I fell in love with the miniatures and immediately began collecting an Imperial Navy fleet. I now also have a Necron fleet. I bought a roll-up space mat so I could play BFG on the limited space afforded by my kitchen table.

But there was just one thing. Despite its beautiful miniatures and well-thought out rules, BFG, like most other space combat games, is basically just naval battles for goths. Any system that’s limited to two dimensions is going to end up like a historical or modern naval warfare game. Starships shouldn’t have broadsides: the scale difference between the ships and the distances between them make such concepts meaningless.

Space is quite different to sea. It’s a good deal larger for a start. But also, things move differently. Spaceships are not boats – if you turn off their engines, they don’t stop. They can’t turn corners in the same way that ships or fighter aircraft do, because there’s nothing there to push against to make them turn.

Of course, I am not the only person to notice this. It has been remarked upon many times in the past. There have been attempts to try and rectify this problem, but none have been particularly satisfying.

For the last few months, I’ve been following a blog being written by someone who might have finally hit on a solution. An antipodean gent by the name of evilleMonkeigh has brought together the threads of a number of different gaming systems and is creating something which feels completely original. His game’s name, Delta Vector, is a sly nod to Δ𝓋, the mathematical expression for a change in velocity, and the truth of Newtonian mechanics which most space combat games ignore.

In the past year evilleMonkeigh has posted about thirty articles outlining the basic operating principles of the game. For me, the most interesting thing is the system of inertia which governs the movement of ships. In evilleMonkeigh’s words:

I’m going to explain it with a series of pictures. You will need 3 counters per ship. One counter is under the ship base at all times. I’m using EM4 tiddlywinks as they are cheap and fit perfectly under  a ‘standard’ hex base (available GZG or EM4).

Once the movement process is completed only 1 counter is visible so you aren’t overly cluttering up the game table.  Obviously you could put a name or code on each ship’s set of counters so you don’t confuse them. 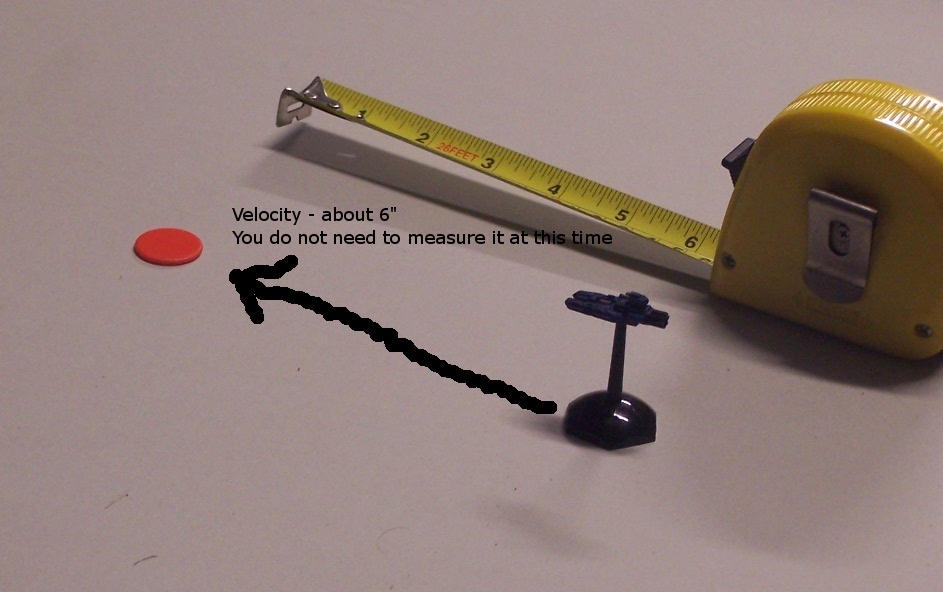 #1. The counter shows the ship velocity and drift direction – where it will end up at the end of its next move if no thrust is applied. You don’t need to measure anything – this is how ships will look when you are not moving them (i.e. most of the time). 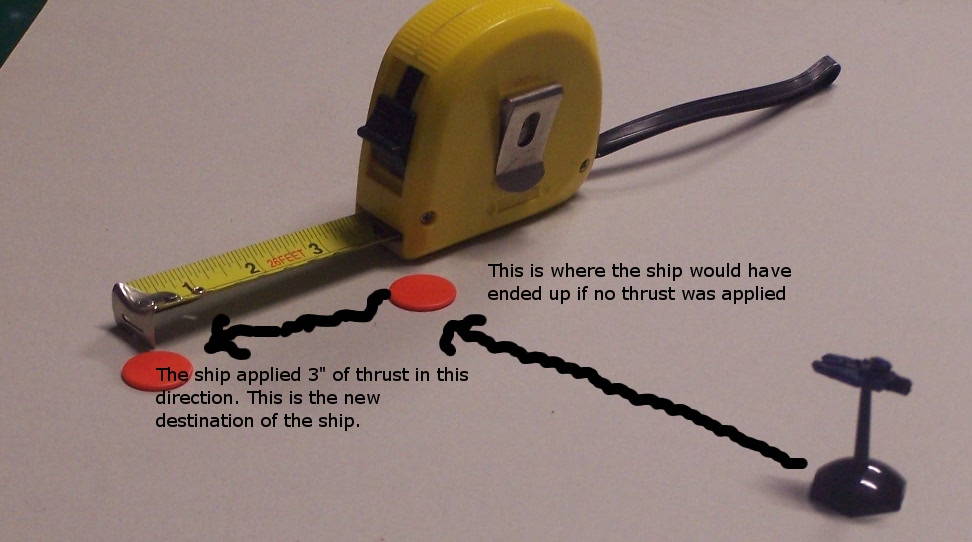 #2. But it is our ship’s turn to move and we choose to move him 3″ to the left. The ship applies 3″ thrust and a new counter is put down, showing the new destination now thrust has been applied.
You may need your tape to measure the thrust distance. 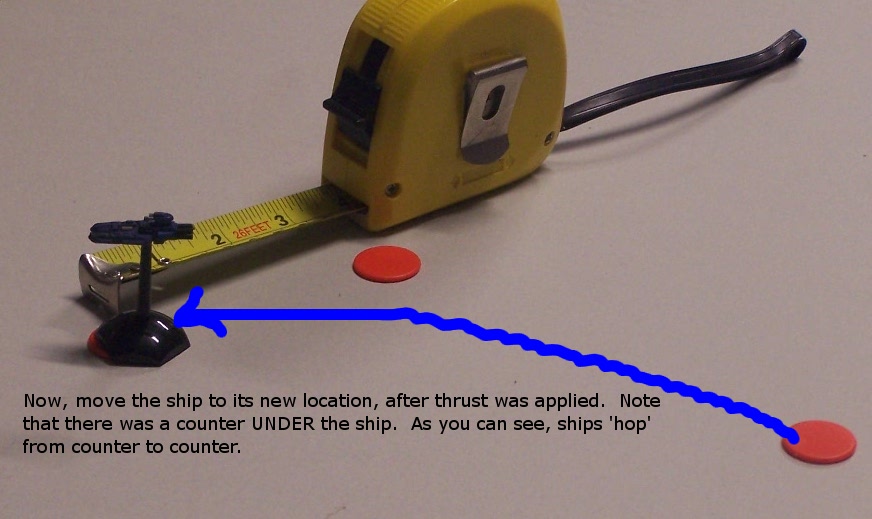 #3. Now we move the ship to its new location. You will note there was a counter under the ship’s base before – ships move from counter to counter. The old pre-thrust drift marker no longer has any relevance, unless you are using the “Facings” optional rule (to be posted separately).

#4. You definitely need to get your tape out now.  Leaving the markers where they are, we measure the new velocity (the distance travelled between the ships old location and its new location). In this example it is 8″.

#5. Using the tape, we make a straight line between the old and new ship locations, and go beyond it to put down a new marker 8″ in front of the ship.

#6. Simply remove the rear counter to tidy things up and we are back were we started at step 1, with the counter in front of the ship showing the direction and velocity of its drift.

When you combine this with an activation based, initiative-driven game sequence, in which enemy ships can react to your actions; resource management; electronic warfare; and an attempt to give escorts a more significant role in the game, it seems to me that Delta Vector has the potential to redefine space-based combat games. I’m looking forward to when the rules are published. If you are too, then subscribe to the Delta Vector blog!